Researching for this paper for school was a heart-wrenching task. I discovered a lot of things about abortion that I could never have imagined were even legal. Yet, even though I shed a few tears, I’m glad I know. Now I can better understand why it is so important to fight so hard against the massacre taking place in our own beloved country.

I’ll warn you that even though I tried not to be graphic while writing this, this isn’t an easy post to read. It will make you think and probably shock you. But it is so important to know the realities of abortion in America so we can be motivated to fervently pray and fight against it.

Mother Teresa once said, “The greatest destroyer of peace is abortion because if a mother can kill her own child, what is left for me to kill you and you to kill me? There is nothing between” (“Mother Teresa”). The 1973 United States Supreme Court decision of Roe vs. Wade legalizing abortion changed the value of human life forever. Contrary to the court’s opinion, medical evidence shows that the savage methods of abortion result in both physical and emotional impairment for the mother. There are some things that pro-choice liberals in the media often fail to reveal about abortion. To uncover these hidden medical secrets, one must set aside opinion and simply obtain the facts.

What is abortion? According to the Merriam-Webster dictionary, abortion is “the termination of a pregnancy after, accompanied by, resulting in, or closely followed by the death of the embryo or fetus” (“Abortion”). This inhuman process can be performed medically or surgically, anywhere from conception to the third pregnancy trimester, depending on the procedure. Surgical abortions are merciless techniques that involve anesthesia for the mother and a violent death for the baby. Shockingly, many of these murders involve the use of forceps and vacuums in the uterus. While most surgical abortions are performed around 13 weeks following a woman’s last menstrual period 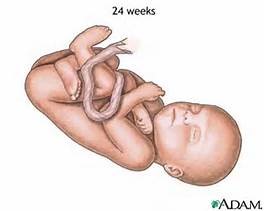 (LMP), some are legally executed at up to 24 weeks. At this point in the development, fetuses are brutally crushed and killed during the surgery (“What Should I Know?” 18). Another type of abortion is a medical abortion. Medical abortions usually involve the mother swallowing or otherwise injecting a pill that ends the baby’s life and expels the fetus through cramping. Pills such as these are used early on in the pregnancy, normally at or around nine weeks. Yet another type of medical abortion involves injections that kill the baby followed by induced labor and delivery of the dead child during the second or even third trimesters of pregnancy (“What Should I Know?” 16). Both medical and surgical abortions are sadistic practices that eliminate the innocent lives of unborn children.

Unavoidably, abortion procedures have a series of psychological effects on the mind and heart of the abortive mother. A number of sources indicate that the initial post-abortive feeling is relief; however, when the relief passes, the majority of women lapse into denial and the agony of repressed emotion. In his summary of the psychological complications of abortion, author David C. Reardon states:

Studies within the first few weeks after the abortion have found that between 40 and 60 percent of women questioned report negative reactions. Within 8 weeks after their abortions, 55% expressed guilt, 44% complained of nervous disorders, 36% had experienced sleep disturbances, 31% had regrets about their decision, and 11% had been prescribed psychotropic medicine by their family doctor.

Other common side effects of abortion are nightmares, depression, anxiety, guilt, violence, difficulty bonding with future children, chronic crying, self-hatred, deterred relationships, damaged self-esteem, overuse of drugs and alcohol, and even attempted suicide (Reardon; “Is Abortion?” Before You 20-21). Some women live in denial for decades before these side-effects and emotions surface. It seems that abjuration after an abortion is the root of countless other psychological issues. Evidently, the numerous mental and emotional effects of abortion impact abortive mothers in a variety of negative ways.

In addition to the sundry of psychological effects, abortive mothers risk serious physical consequences. The majority of women who undergo surgical abortions experience extreme pain, despite the fact that they are provided with anesthesia (“Is Abortion?” National Right). After all, according to the National Right to Life, “…induced abortion is the premature, willful, and violent penetration of a closed and safeguarded system—a system in which nearly every cell, tissue and organ of a women’s reproductive system has been specially transformed and activated to carry out the function of sustaining and nourishing the developing child” (“Is Abortion?” National Right). It is not surprising, then, that abortion has so many physical side effects. The most common concerns are bleeding, inflammation, infections, fevers, vomiting, anesthesia complications, and abdominal pain. Rarer, more serious effects include hemorrhage, laceration of the cervix or uterus, damage to the bowels or bladder, sterility, infertility, organ damage, emboli (blood clots), or RH sensation (“Is Abortion?” National Right; “Is Abortion?” Before You 20; Reardon). Additionally, abortion puts a woman at risk for difficulty in future pregnancies (Reardon). Damage to the reproductive organs, cervix, or uterus weaken their performance during desired pregnancies. This results in complications such as ectopic pregnancies, premature births, birth defects, and miscarriages. It has also been found that abortion puts women at an incredibly increased risk for breast cancer. Shockingly, it was found that women under 18 who abort their first pregnancy before the 8th week LMP are at an 800% higher chance of getting breast cancer before age 45, especially if their family has a history of breast cancer. In fact, any woman who receives an abortion increases her risk by 50% (Reardon). Finally, the rarest and most fearful side effect of abortion is the death of the mother. In pregnancies eliminated before 8 weeks LMP, the death rate is 1 in a million. However, the longer the term of the pregnancy, the increased risk of death. For example, pregnancies terminated after 21 weeks include a death rate of 91 in a million (“Is Abortion?” Before You 20). The physical consequences of abortion on both the abortive mother and her future pregnancies are truly devastating.

What, then, does the media fail to inform us regarding abortion? Abortion is not only the murder of a defenseless unborn child; it is the ruin of countless mothers who honestly believe it is their only choice. Through legally disturbing methods, fetuses are brutally crushed and torn apart. Consequently, these methods have a lasting effect on the mother, both emotionally and physically. The value of human life is spiraling downward at a rapidly disturbing pace. What are you going to do about it?

3 thoughts on “What the Media Never Tells You About Abortion”

{NEW BLOG} Christians often look so much like the world that we can barely be characterized as Christians. If you are like me, you find yourself compromising a little too often. There's a quote that I always remind myself of when I fall short of the mark--check out the blog today to read more.
People always seek to be defined by something, so they turn to quizzes and theories to figure out who they are. It’s fun to figure out the ins and outs of personality theory. But we must remember that Christ is the center of our lives—He is what defines us. Link in bio for a new post!
There are some days that I just don’t like people. Maybe it’s just me, but sometimes I reach my limit with everybody. What I've been learning, though, is that Biblical love is unconditional—it is not based on feelings or whether or not I like a person at any given moment. Biblical love is serving people despite my feelings toward them. Check out the link in my bio to read more!
Excited for the newest @girldefined book! This topic is sticky and widely unaddressed in the Christian community. Authors Kristen Clark and Bethany Baird are brave enough to address the topic Biblically, and I can't wait to read the book. Check out my #linkinbio to preorder! #launchteam #girldefined
We may not be able to see God, but we can learn to know Him through His attributes. Check out the blog for my interpretation of a few of the attributes of God. Link in bio! #craftedbychrist #christianbloggers #writersofinstagram
There are more slaves in the world today than there were during the American slave trade. Slavery is an epidemic, and we might never be able to stop it. But we serve a God that is MORE POWERFUL than any power of the world. Today, write a red ❌ on your hand to raise awareness, educate yourself about slavery, and, most importantly, PRAY. JOIN the movement by writing an ❌ on your hand and posting a picture to social media. Together we can END IT. #endit #enditmovement #slavery
When I started college, I wasn’t sure it was possible to thrive as a college student. College is a rushed blur of classes, homework, and work while still trying to prioritize time with God, relationships with my family, and a social life. With so much going on at once, it seems next to impossible to thrive. As the months have passed, however, I’ve learned that it is possible. Link in bio!
Like many people, I struggle with anxiety. It’s not the crippling kind that causes panic attacks and mental health issues, but the nagging kind that continually whispers the question “what if?” into my ear, causing me to fall into sinful worry and uncertainty. I can’t control my life and it makes me crazy. But I’m beginning to learn that not being in control just might be okay. Check out my link in bio to read what I've been learning!
Introducing the Crafted by Christ Facebook community! This is a community for all different types of people with a variety of knowledge and experiences to connect, grow, and learn together as we seek to deepen our relationships with Christ and live for Him to the best of our ability. Check out my link in bio to join! I can't wait to interact with you all!